It is important to focus on forests rather than individual trees when evaluating trade-offs between infill and sprawled development. Note: This is an expanded version of Seeing the Forest for the Trees in Urban Planning published February 10 in the “Times Colonist.”

I certainly appreciate their intent. Trees are beautiful and enhance the environment, so it is good to support urban forests. However, that does not require protecting every tree. Infill opponents focus on a few, highly visible trees while ignoring much larger threats to forests. These critics generally have nothing to lose. I’ve never heard homeowners protesting the cutting of trees that threaten their house, or motorists opposing tree removals needed to expand roads or parking lots. For example, the loss of 212 trees, including 182 ecologically important Gerry Oaks, to expand a regional highway interchange raised virtually no opposition.

The criticized projects cause far smaller habitat losses than what would occur with more sprawled development and automobile-oriented transport planning. Methods described below can be used to evaluate these impacts.

Land uses vary in their environmental values, including wildlife habitat, groundwater percolation and beauty. The most ecologically valuable lands are undisturbed natural openspaces, such as forests and shrub lands. Farmlands, urban parks, gardens and laws generally have less biological diversity, and heavy fertilizer and pesticide use reduce their habitat and groundwater recharge values. Buildings and pavement are impervious surfaces (they allow no groundwater percolation), although their environmental values can be enhanced with landscaping and the use of permeable materials. The table below rates the environmental values of various land uses.

Various studies have measured the portion of urban land devoted to impervious surfaces.

The figure below illustrates the portion of land devoted to streets, sidewalks, parking and buildings in various urban conditions.

A Vancouver region study that used detail ground cover mapping tools found that higher density housing (e.g. condos and towers) is accommodating more trees, with a corresponding decrease in impervious surfaces, while lower density housing accommodates increasingly fewer trees and more impervious surface due to expanding home sizes and lot-splitting. Tree Canopy Cover declined from 36% for housing built in 1970 to 18% for those built in 2000. This decline indicates that fewer, or smaller, trees are being retained or planted during construction of low density housing over time. In contrast, tree canopy is higher for newer high density housing. New high-rise,  “Vancouverism” residential buildings use relatively little lot coverage which allows more greenspace, street trees and other public space at their base. This explains the observed increase in percentage Tree Canopy Cover, and decline in percentage Impervious Surface during the decades leading up to 1980. The West End neighborhood in the City of Vancouver is a good example of this phenomenon, where the majority of its residential high rises were constructed between 1960 and 1980.

These studies indicate that in typical urban areas there are 2-6 off-street parking spaces per motor vehicle, averaging 300-400 square feet each, including their driveways, plus 120-1,000 square feet of paved roads. In total, roads and parking facilities typically cover 10-25% of urban land, far more than the amount of land devoted to buildings. Walking, bicycling and public transit are far more space-efficient, considering both road and parking requirements. This indicates that transport patterns significantly affect per capita impervious surface area: if automobile ownership increases, more land must be paved for roads and parking, if residents own fewer vehicles, drive less and rely more on walking, bicycling and public transit, more land can be devoted to greenspace.

These impacts are important but often ignored. When purchasing a motor vehicle, consumers seldom consider the additional pavement they will need, and the environmental damages this will cause. Similarly, planners seldom quantify the amount of habitat preserved by policies that reduce automobile ownership and encourage infill rather than sprawled development.

The table below calculates the impervious surface area required for three housing types: car-free urban, car-owing urban, and suburban. It assumes that each house has 1,800 square feet (sf) of interior space, with three stories in cities and one story in suburbs; the car-free urban household uses a tenth of a vehicle through sharing and taxis, the car-owning urban owns one car, and the suburban household owns two cars; parking spaces (including driveways) average 300 sf in cities and 400 sf in suburbs; and road space per vehicle averages 200 sf in cities and 1,000 in suburbs.

The figure below illustrates the results. A typical two-car suburban household requires approximately 4,800 square feet more impervious surface than a one-car urban household, and 5,520 more than a car-free urban household. 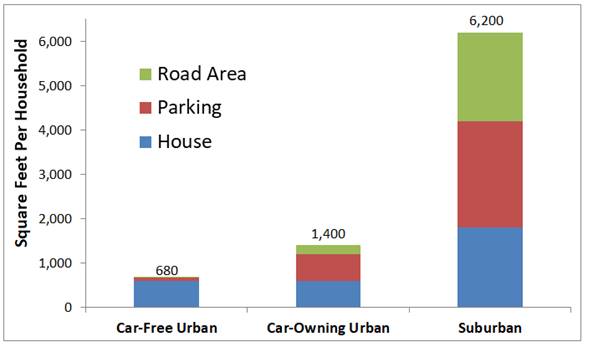 Households require much less impervious surface if they lived in urban areas with minimal vehicles.

Let’s put these numbers into perspective. An urban village, where commonly-used services (elementary schools, shops, restaurants, public transit, etc.) are within convenient walking distance of most homes, requires about 15 housing units per acre. The table below compares urban and suburban impervious surface areas.

Because suburban areas have more land per household, they can accommodate the large amounts of pavement required for motor vehicles and still maintain significant openspace. Urban areas have less land per household and so must minimize road and parking area if they are to preserve openspace. For example, if urban households own just one vehicle which requires two 300 sf parking spaces and 200 sf of road space, nearly half the city is covered with buildings and pavement. This does not mean that habitat protection requires that every household be car-free, but it does suggest that minimizing vehicle ownership is essential for protecting environmental values.

It is also interesting to compare impervious surface footprints with urban park area. According to the Trust for Public Land’s 2017 City Park Facts, cities average 13 acres of public park per 1,000 residents, or about 570 sf per capita. This is comparable to per capita housing footprints, but less than road and parking area required for one automobile.

A healthy forest contains 40-100 significant trees per acre. Since urban households require about one-eighth an acre (4,800-5,520 sf) less impervious surface, each suburban home displaces 5-12 additional trees. This indicates that the Bellewood Park project, which displaced ten significant trees to build 83 housing units, protected 415-996 trees that would have been cut if the same number of houses were built at the urban fringe.

Trees are dynamic and renewable resources – they sprout, grow and eventually die – so a forest’s long-term health depends more on the planting of new trees, not just the preservation of old ones. Critics imply that tree planting provides little benefit, citing a study which estimated that one mature tree equals the carbon storage of 269 saplings, but that estimate only applies to very young trees. Trees’ carbon storage increases rapidly as they grow, so within a few years the 269 younger store as much as an old tree, and subsequently they provide far greater benefits.

Overall, this indicates that sprawled, automobile-oriented development displaces 5-10 times as much openspace and generates about three times the emissions as urban infill. Residents seldom consider these impacts. You might remove a few trees around your home to improve your view or reduce falling or fire risks. You probably only notice the land paved for roads and parking when they are congested and you want more. You probably never added up all of the land used by your home, parking and roads, and considered the trees they displace.

NIMBYs often criticize infill development that displaces trees, but these impacts are generally much smaller than would result from the same number of lower-density homes built in automobile-dependent sprawl where residents own more vehicles, and so require more pavement for roads and parking. Compact urban housing generates about half as many vehicle trips which preserves habitat and reduces pollution emissions; these impacts should be considered when evaluating development.

Trees are renewable: they grow and eventually die. To improve urban forests, plant more trees than are lost, and do everything possible to encourage compact development and space-efficient travel modes in order to minimize the amount of habitat displaced by buildings, roads and parking.

Here are two letters to the editor criticizing the original column: